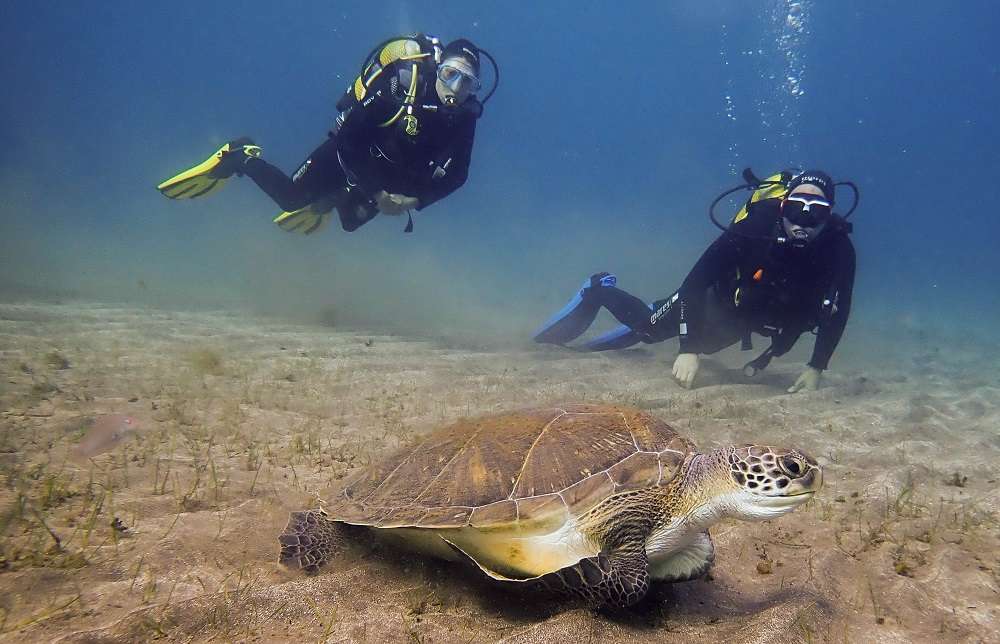 The waters off the coast of Tenerife have the optimal conditions for turtles to thrive and live. Throughout our beautiful island we have different places where we have the opportunity to see these beautiful creatures in their natural habitat. If your lucky you can sometimes see them whilst snorkelling.

As turtles are wild animals we cannot guarantee if you will see them or not, It is often down to luck.  Here at Medanodive the most important thing for us is that we dive responsibly and enter the waters as spectators and enjoy what comes along to see us.

Where to see turtles in Tenerife?

Abades is a small coastal town in the south of Tenerife. It is just 12 minutes by car from Tenerife South Airport and 15 from El Médano. It is an enigmatic little town that has managed to retain its charm despite being a few kilometers from the most tourist areas of the island. It is characterized by its low white houses and for being one of the best diving areas in all of Tenerife.

Among other marine species at its beautiful reefs we can see the family of turtles that have made Abades their home swimming and eating in their natural habitat..

El Porís de Abona is a town close to Abades but it is a little further north. It belongs to the municipality of Arico. and  is another great dive site due to its rich sea beds where we also have the opportunity to see the turtles. On a sunny day it is an ideal place to go for a swim or snorkel off the harbour wall.

Recently, the turtles in the Porís area have been featured in the Canary Islands newspapers due to the residents of the area helping save several turtles that have become entangled in rope or line.

El Médano is a beautiful  town located just a few kilometres from the airport and is well known for its various watersports such as Kite-surfing Wind-surfing, Stand up paddle…

It is not uncommon for the people enjoying these sports to see the turtles beneath them.

You can enjoy a cool dip off the harbour wall or at high tide you can snorkel along the small house reef.

Can you imagine going out on a Stand up paddle and seeing a turtle swimming past you.?

A few years ago in El Puertito there were turtles practically all year round and both tourists and locals alike  went to see them.  So much was the expectation that they caused that the area ended up becoming a place of claim for tourist companies. Boats, kayaks, tourists with little respect for the environment came to visit the turtles on a daily basis. The anchors and propellers of the boats ended up injuring almost all the turtles, and they had to rescue the turtles and remove them from the area  because one of them was sick, another had a shell broken by being struck with a propeller , another had been shot by  a harpoon, To this end  they were in danger if they continued there to live their and a decision was made to relocate them  We leave you a link to a video explaining the history of the Puertito de Adeje, or Armeñime.

In the video sensitive images appear about the consequences suffered by the turtles and you can see how they were rescued.

There are other areas of the island where you can dive with turtles, but here we have made a selection of the places where they can be seen in their natural habitat.

At MedanoDive we are very careful in the areas we choose to dive and snorkel with regards to the turtles, as although we wish to see these magnificent creatures we will not go to the areas that are actively feeding.

It is not natural for the turtle, or any other wild animal, to be fed by humans. They must be the ones looking for their own food because otherwise the course of nature is being altered.

If a turtle knows that groups of people are going to come to feed it every day, it will stop looking for food by itself, it will directly wait to be fed. That causes them to have changes in their behavior in addition to the problems that overfeeding entails.

This is not the only negative consequence of feeding. In addition, the places where they go to feed the turtles often become tourist attraction areas, very crowded with people and boats, which has terrible consequences for the integrity of the turtles, as we have already seen happened in Armeñime.

To this end,  Diving in Tenerife with turtles can be a great experience but we must understand they are wild animals and should be treated as such.

To us, to see the turtles where they are being fed is the same practice as seeing animals in a zoo. To see them naturally is a far more magical experience for you and the animal.

So, When is the best time of the year to see the turtles?

We have good news, the best time of year to see the turtles in Tenerife is all year! And this is  because the island’s climate is ideal for them: good temperate waters an abundance of food.

Generally the areas we have mentioned above are the best places to see the turtles living in their natural areas.

How do i help a trapped or injured turtle?

In this video you can see how the plastic was removed  from the turtle but in all cases you should first attempt to get professional help.

The first thing to keep in mind is that if you do not have the necessary knowledge, you should call the Recovery Center (Phone number below) so that they can come to help the turtle. Catching a turtle, even if it is with good intentions and to help it requires authorization.

These are the two most common situations in which you can find an injured or trapped turtle:

It is more common that you can find a turtle tangled in plastic, nylon or ropes. In this case, you must act according to whether, in addition to being tangled, it is  injured. If it is injured you should call the recovery center, and if it is simply tangled and you see that you can free it, carefully cut the plastic or nylon.

If you find an injured or sick animal on the island of Tenerife, call the “La Tahonilla” Wildlife Recovery Center of the Cabildo de Tenerife

What types of turtles can be seen on Tenerife?

There are mainly two types of sea turtles that can be seen on the island of Tenerife.

The green turtle is one of the species of sea turtles that we can find in the waters of the Canary Islands. Its name is due to the color of the fat it has under the shell.

Their diet varies depending on the age of the turtle, the smallest feed on jellyfish, crabs, snails and worms, and once they are 2 years old they become predominantly herbivorous, with a wide variety of food that ranges from sponges to mollusks.

The largest green turtle on record reached a weight of about 395 kg.

The Green turtles life begins on land. Females are fertile in the sea but go ashore to deposit their eggs in a hole they dig themselves so that they are protected from possible predators.

This nesting is usually every two years and each time they lay between 100 and 200 eggs.

Turtles are therefore oviparous at birth through a reproduction modality that includes the deposit of eggs in the external environment where they complete their embryonic development before hatching. The birth takes place approximately 60 days after the female has deposited them on land. Green turtle hatchlings hatch themselves and hatch. At that moment the challenge of reaching the sea alive begins, because on that journey they can be attacked by land predators.

As we have already said , from the moment they hatch and head to the sea their are many predators that awaits them , the most common being pelicans, crabs and gulls.

In adulthood, and once already at sea, the greatest enemies of green turtles are large sharks and human action, either directly with fishing or indirectly with the plastic waste in the seas and the serious  consequences this causes for the health of marine animals.

The loggerhead turtle is present all year round and is seen more  in the spring-summer months.

It is also known as loggerhead or loggerhead turtle, due to the size of its head that is larger than that of the rest of the species of sea turtles.

Unlike the green turtle, the loggerhead turtle is omnivorous, feeding on both animals and plants.They  eat algae and marine plants as well as some fish, jellyfish, sponges, shrimp, squid, fish eggs,  sea cucumbers, and starfish.

Did you know that they also eat newborn turtles, even members of the same species?

They are also oviparous animals and their birth is very similar to that of the green turtle . Females also bury the eggs they deposit in the sand to protect them until hatching. Incubation lasts slightly longer than that of the green turtle, lasting around 80 days. When the baby is born, it breaks the shell and heads towards the sea.

The process usually takes place at night so that there are the fewest predators and they are guided by the reflection of the stars and the moon in the sea water to find their way.

Their adulthood passes between the migratory processes that are based on the search for food and between the reproductive processes.

Loggerhead turtles have all kinds of enemies, both aquatic and terrestrial, and both other animals and humans.

As we have explained, turtle hatchlings have all kinds of land enemies on their first trip to the sea. Once in the water, just like for green turtles, the shark is one of their greatest adversaries.

There are some countries like Mexico where it is common to eat turtle eggs, and there are regions in the world where the turtle is directly fished to eat its meat. They are also chased for their shells, which are used to make jewelry and other items. In addition to direct fishing, turtles are also victims of human action.

Studies have concluded that they are not harmful to the health of turtles, some even bring benefits to them by fulfilling certain functions.

Unfortunately both are endangered species. Turtles are protected by the Endangered Species Act of 1973 and are included in the Canary Catalogue of Protected Species (ACT 4/2010, of June 4), as SPECIAL PROTECTION SPECIES.

The criteria established by legislation to consider that a species is in danger of extinction takes into account the following criteria: distribution of the species, population size and probability of extinction.

Final note, These creatures are a beautiful site to see but we must trteat them with the respect they deserve and respect their area.

The fines that can be imposed are anywhere between 3001-200 000 euros for committing offences against endangered species.